Lily is the regional representative of the South East Asia Directors of Music (SEADOM) and a Music Consultant to many music institutions. She has also served as an adjudicator for many international music festivals and is often invited by Corporate Firms as an Event Producer and Motivational Speaker. Currently, she is the Director and founder of Expression Music Academy in Brunei (3 branches: Kiulap, Airport Mall and Kuala Belait) and Expression Music Inc at Makati, the Philippines. She also has more than 20 licensees in China (Chang Chun 長春, Dalian 大连, Harbin 哈尔滨) and 1 in Houston, USA.

She is also the Manager of Shian Li Chiam, ‘Junior Grand Champion Instrumentalist of the World’ at the World Championship of Performing Arts in Los Angeles, California in 2014) and Eden Chiam (Top 1st Place of the Pop Adult Voice at the 4th Hong Kong International Music Festival).

Lily was born in Kuala Belait, Brunei Darussalam. Having been caught on camera as early as 6 months old playing on a toy piano, Lily’s love for music has grown into a great passion for life and the expression of the arts for all.

As a young girl, her parents disagree of her learning piano because they think it’s just a luxury expense. But Lily did not give up, at the age of 10, she was helping her mom to do side work so she can earn and save money to sustain her love for music. Later on, she purchased her first keyboard where she started learning on her own.

Lily’s childhood reflected a sound and somewhat conservative approach to learning but she always harbored her dream to further her musical passion, but it wasnt until she was 16 that her English teacher recommended she take her first formal piano lesson, she was to learn fast as the power of her passion was given opportunity to live out loud. In an almost unheard of speed Lily finished five Grades in less than 2 years. In 1992 Lily went to Canada to North America Baptist College. She became one of personal students of the famous late pianist Dr Lejano in Edmonton and did her Bachelor of Arts in Music at University of Alberta, Canada.

She successfully obtained a double degree in AAR Music and BA. Lily started performing tours in both North America (Canada and USA) as well as Asia.

In 1996, Lily returned to Brunei and founded Expression Music Academy. An academy that has now become a premier musical establishment in Brunei with 3 different branches. Expression Music Academy has also expanded overseas with 1 branch in Philippines (2016) and 1 franchisee in Singapore (MidiWorld). Lilys vision is to nurture music students and music lovers in Brunei Darussalam through providing quality music teaching, learning resources, instruments supplies and services. With over 1,000 students weekly Lily and her staff of highly qualified professionals make fulfilling the dreams of many young musicians to bring out the best in each of them, through lessons, performances as well as concerts.

It is with great pleasure that I introduce the amazing talents of Lily Chiam. She is fast becoming one of the brightest artist composers in her region. Her music rings with clarity that places the album is a collaboration spanning over one year. We had the pleasure of recording in Sydney, Melbourne, Adelaide, Los Angeles and New York. TOGETHER is a labour of love intended for your pleasure. Enjoy it many times over.

Her powerful inspiration and imagination are reflected in her bold, driving and colorful paintings employing interesting range of concepts and mediums.

Through her music, poetry and paint brushes, she found her freedom of expression.

For a comprehensive list of Activities that Lily has been involved in, please see the News Archive 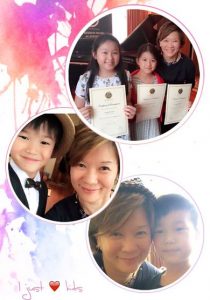 For private and government functions: